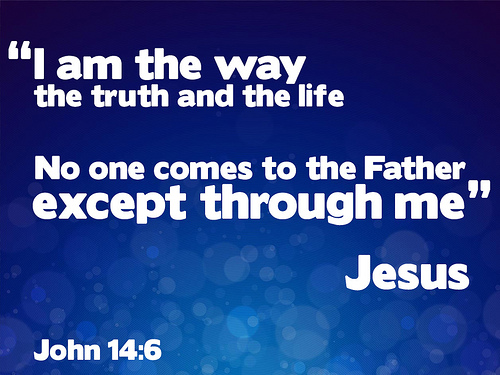 Jesus answered, “I am the way and the truth and the life. No one comes to the Father except through me” (John 14:6).

Who do you say Jesus is?

Jesus had a lot to say about truth. He used the phrase “I tell you the truth” more than seventy times throughout the Gospels. He stated that the very reason he was born was to testify to the truth. He pointed people to the truth of God’s Word, and he drew a line in the sand, declaring that on his side is truth, and anything else is falsehood.

But perhaps the boldest of all his claims about truth was this – that he claimed to be the Truth. That there is no separation between the Truth and who he is. That he is the absolute embodiment of absolute Truth. And he went on to make the claim that because he is the embodiment of Truth, no one gets to God except by him.

There are a lot of people in the world claiming to have the truth. There are a lot of religions out there claiming to have the way to God. For the most part, our culture is all about being tolerant and accepting of all religious viewpoints… that is, except for Jesus. Sure, many people give lip service to Jesus, claiming that he’s all about peace and love and kindness and acceptance, and that he was a great teacher. But if anyone points out that Jesus said he’s also the only Truth and the only way to God, suddenly he isn’t so well appreciated.

This should be no surprise. After all, when Jesus made his claims, it made people angry enough that they put him to death. When a religious leader stands up and says, “I am the way and the truth and the life. No one comes to the Father except through me,” that’s when people start getting upset. And after 2,000 years he’s still intimidating people. Because he proved his right to claim that he is the Truth by his resurrection.

So who do you say he is? When his disciples were asked that question, they answered, “You are the Christ, the Son of the Living God.” Jesus said that that’s the Truth on which he would build his entire Church. He is the Truth on which we build, and he is the one who brings us to God.